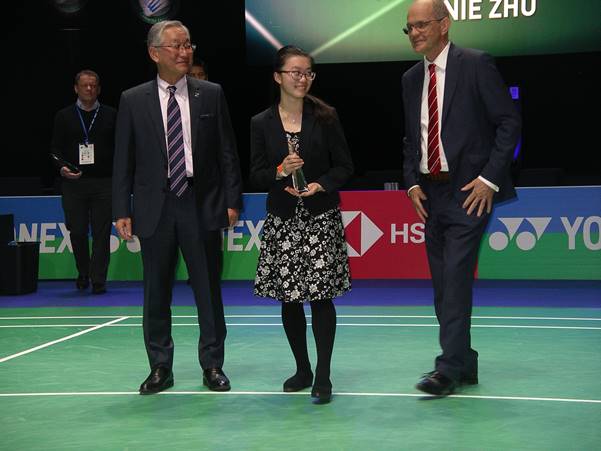 Annie receiving the award at the Yonex All England Championships in March 2020.

The award was presented by Kusaki Hayashida, President of Yonex, together with Mike Robinson, Chair of Badminton England.

Annie is a truly inspiring young lady who, at only 16 years of age, has shown huge potential as a volunteer in the Tees Valley area. She had been showing potential as a volunteer for several years at Thornaby Junior Club but, after attending the Badminton England North Young Leaders Academy in 2018, she really blossomed in 2019 into a confident and inspiring Young Leader. Alongside training at the Tees Valley Badminton Academy and playing 3-4 per week, she always acts as a role model and manages to give her time to younger, less experienced players at the weekly Thornaby Junior Club session. She has been the lead Young Leader at numerous local school events such as Racket Pack festivals and the County Finals of the School Games as well as assisting Tournament Referees at the Tees Valley Gold/Silver/Bronze tournaments. To date, Annie has helped at four tournaments, entering results onto Tournament Software and has acted as the court manager. After attending the Young Leaders Academy, she was invited to be a Young Official at the National Badminton Centre in Milton Keynes at the Finals of the National Schools Championships. Not satisfied with her successes as a Young Leader, this young volunteer wanted to further develop herself so she could improve the quality of the coaching advice she was giving to the junior players and her ability to develop the quality of their play. In April 2019, she successfully gained her Level 1 Coaching Qualification, only one month after her 16th birthday! Alongside her volunteering, her commitment to “be the best she can” is evidenced by successfully applying in 2017 for a place on the sub regional Future Champions programme. Annie’s goals for the future include; completing her Level 2 Coaching Qualification when she turns 18 years old, using her own training and involvement with the Future Champions programme to inspire others, continuing with her current level of volunteering, volunteering at top level prestigious tournaments (such as the Yorkshire Gold Masters) and successfully applying to universities to start training as a doctor.